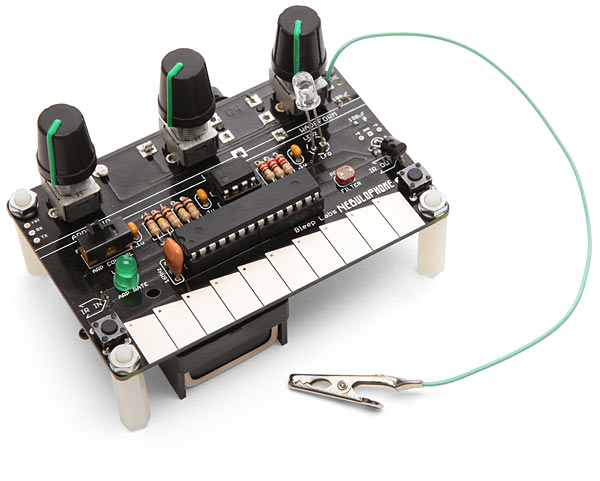 To prepare for the upcoming release of v2.5, we had a photoshoot taken in Dave's studio by Karla Clute. At this point in my career I am completely sick of pretty much all band photos. How often can you see a guy standing in front of a fence or brick wall, or some "industrial" scrapyard and find this compelling? So for this photoshoot we decided to basically just create sounds using Dave's vast array of modular gear and have Karla shoot action shots. We never intended to actually create a song, or have a finished product. Just to have the photos taken while actually working instead of posing.

Ten minutes into it, I looked at Dave and said "you know this sounds pretty cool, we should be recording this?". So he hit record in Ableton which was already recieving a feed from his mixer. We didn't say another word about it and pretty much just continued randomly creating something. There was no plan, even at a high level. No discussion of tempos or pitches or even sounds. We just got lost in spontaneous sound generation.

It turned out pretty cool really so I edited down the 30 minute recording into the track available for free on soundcloud called Session 1. No additional editing or processing was done. I just deleted the dead spaces where we were changing positions or getting started with a new set of modules.

In December of 2010 I did a similar experiment that resulted in Session 2 using a Nebulophone in subHarmonic studios. I ran it through a bunch of nifty effect boxes Dave has to produce the final track.

Enjoy Sessions 1 and 2 free on our soundcloud page.